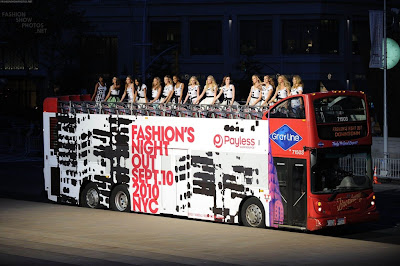 Fashion Week SS-11 really crept up on me this year. People, IT ALREADY STARTED?! That having been said, the question everyone in fashion has been asking ad nauseum is "What are you doing for Fashions Night Out?". The problem is, there's so much going on! I guess that is a nice problem to have, I've managed to narrow down my list so I just wanted you to know three spots I'll definitely be at.

First stop will be the Fratelli Rossetti Boutique (Madison & 59th) to support my sweet friend Behati Prinsloo in her first ever photo exhibition! I saw her yesterday and she says she's been setting up all week, hanging the photos just so and deciding on lighting. You might remember a few months ago I showed you the amazing engagement pictures she took of James and I. Now I'm super excited to see her work on a large scale!

The next stop will be to meet up with Zac Posen at Saks Fifth Avenue (5th and 49th). People always ask me if I can get them tickets to shows, as if I just get handed a stack of them at the beginning of every fashion week. Sadly I don't, but this time I can at least try to get you a ticket. As far as NY shows go, it doesn't get much better than Mr. Posen and everyone who shows up at Saks will be able to enter to win tickets to his show on Saturday! In fact he has invited me to help him pick the winners with him!

After 8pm I'll be heading downtown to the Reiss London store in Soho for my own event with Rimmel. The theme of the party is all things British. Being that this year I married myself a Brit and the slogan on my Rimmel campaign is "Get the London Look!" I felt it was a good fit. Makeup Artist Liz Pugh will be there (she did my wedding make-up in France FYI) along with stylists and Vogue experts who can help you create your own London look and makeover. Come get a goodie bag, get your make up done, get glammed up for the rest your night out on the town and take a picture with me!!!

So those are the main three stops, but there are sure to be others!! The whole night I'll be tweeting from http://twitter.com/Oh_So_Coco so follow me to find out the details of my night and tweet me  to let me know whats going on around you - I just might stop by!

definitely making a stop at Macy's where Rachel Rachel Roy w/ Jess Stam and then later on Kimora Lee Simmons will be there also. Oh and Alice and Olivia! Hope to see u!

Ohh, can you take lots of pictures please? It would be amazing to see the night from your point of view! I live in a little town in Nebraska, not exactly brimming with activity (especially of the fashion variety). New York's my favorite city - I'll be there in spirit!

Hi coco! Wow! a blog that good idea! I wish I could go to any event like this! and then I will:) I'm super excited to write! You are a great inspiration for me as a design student and future fashion designer! Argentina hope to see you some day ♥

I'm planning to do the SoHo loop, and will definitely stop by Reiss!

THere aresome local events I'm going to check out (since I'm not in NYC or any other megalopolis) and I'm going to watch some of the live streaming shows online.

I'm hoping like Casee Marie that you will take lots of pictures and post them! Seeing an event through the eyes of the attendees is always fun!

PS I wish I was on that doible decker bus. It looks like fun!

We're all booked for makeovers at Korres Soho Store where they also serve detoxing bubbly and cupcakes. And gift bags of course. After we'll just browse around Soho to see what else is going on. It's going to be awesome night. Just like last year! Have a wonderful time sweetie!

I will be at home, wishing I was in NY for FNO! Someday...a girl can dream can't she?!?

You are sooo lucky to be on fw! im on the other side of the continent but i will join you on the web and twitter! Coco, is it true is your birthday today? if it is, HAVE A WONDERFUL DAY!!! Hope this year is the best ever! kisses and hugs from peru

i'm going to the LA FNO party at Beverly Center~! Super excited for this year's FNO!

Plus Refinery29 is throwing a party with Phillip Lim, can't miss that.

~ wheee! ~ of course I can't be there but best wishes and congratulations to Behati & to you! stay safe & have lots of FUNNN!!! !!

I Wish I Was In New York Seeing You And All The Models And Fashion People Liverpool, England Is BORING!!! This Is So Depressing

I'm stuck at the other side of the world, wishing I am in NYC right now :(
Keep updating, Coco! You're my sole source ;D