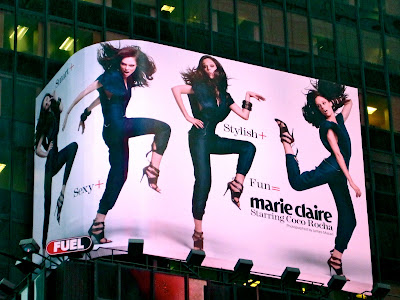 For this entire month you can find this billboard of me up in the bright lights of Times Square, New York. The reason why its up is, for now, a closely guarded secret... does any one have any guesses??


XOXO COCO
Update: People have been posting photos of themselves in front of the billboard (Though one looks suspiciously photoshopped haha)!! If you put yours on my official facebook page I'll continue to update this post with the pictures! 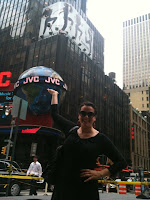 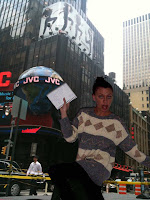 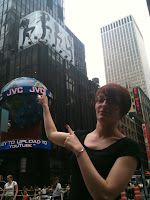 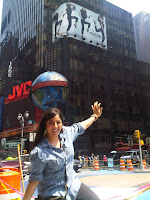 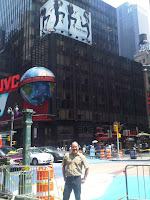 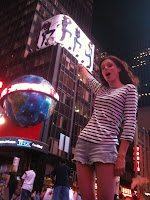 UPDATE 8/6/10: As revealed on last nights Project Runway, the billboard was part of the prize for the winner Gretchen. I was thrilled when Project Runway asked me to wear her design and be a part of the photo shoot for the show. I believe a behind-the-scenes video is coming out soon...
Posted by Coco Rocha at 3:51 PM

i'm guessing something to do with marie claire...haha!

I like that! Probably it is a new TV Show for Marie Claire or you'll write for the magazine???
BTW Congrats on your new VS Pink... I'd love to see you doing Victoria's Secret Show.. I know you like to see the show since you were little girl, but what about doing it?

Congratulations! My guess is that you'll be guest-posting at Marie Claire?

I am definitely intrigued. :)

I think the previous commentators are probably right, but I thought maybe Marie Claire is releasing a clothing, show or jewelry line and you're the spokesmodel? I dunno, great billboard though! You're doing Canuck gals proud!

Wow i am so jealous you're on billboards, you're very pretty :)

I have no idea but can't wait to find out! Sounds very exciting my dear!

ahh, does it feel absolutely unreal that your face is plastered all over times sq?

Hello Coco! Let me know if you're still in Vancouver on 07/22. Would love to invite you to a local event if you're interested =)

(I know you must get that all them time, just thought I'd try! I hope you are enjoying your time here!)

i will always think that the way you pose is the most original and fun of all.

Guest editor on the mag or a host on their new TV show? Most probably the TV show :D

No idea, but definitely something great;p

gorgeous editorial!! you're so sweet coco :)

i'm not sure about the reason for the billboard, the other comments had some good ideas, but whatever the reason, you look wonderful, as usual :)

You`ll write for the magazine! (:

the secret of fashion said...

i wasnt able to add you cos you have to many request. :(
but judging by the big globe thing it could be something to do with TV! i hope so i love watching your personality on screen.

You are very beautiful, one of my favorite models! If you want visit my blog... I'd be absolutely happy!
http://rejectingtheobviousness.blogspot.com

the surprise thing with marie claire is the monthly "what you are wearing everyday" thing isn't it?

coco, i would appreciate it so much if you read this and passed it along to people you care about. it means a lot to me. i know that this is something you fight for too.
thanks!

Love it! Too bad I'm not in NY anymore I went there in june and a part of july but it's too bad that I didn't stayed more days there so I could see it :(

Maybe you will write there or you have a side in the magazine.

Sorry for my English, :)

hi! coco...in this moment i make a fashion illustration of ur at Costume Institute Gala at the Metropolitan Museum of Art.. with ur dress of Zac Posen maybe.. before y upload on my blog...
xoxo

Absolutly amazing! Congrats on getting on such a huge billboard in an amazing place like Time Square! And Giiiirl, those poses are FIERCE.

you're gorgeous,the first time i know your name is on the magazine.the indonesian magz,and they're talking about mega models,and i really excited for your blog,fascinating!

It was for Project Runway and Marie Claire :)

Dreamy Princess
~I wonder what it's like to live in Paris~

i just watched the project runway episode several days ago, and when i saw that the model for the challenge winner dress is you, i was like, im sooo jealous for gretchen!! :D

All pictures are Awesome!Overall fantastic peace of work about fashion and life style.