Hey everyone, I'm currently writing this blog as I fly to Montreal. I've had a lovely two weeks in New York, settling back into "real life" with the hubby (yes, I really did just say that). We arranged all the furniture, a few times and worked out little things like who does the dishes (him) and who makes the bed (both of us, since its so massive). Anyway, I just wanted to write a little blog to let you know about THREE work related things going on right now too: 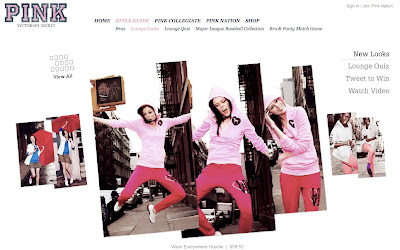 The first thing which was recently announced is that I have joined my bud Behati for VS pink (click!) We had fun catching up on set and bouncing around the streets of Soho. Here's a few pictures posted from my twitter and Behati's twitter back in May, though we didn't tell you what it was for at the time! 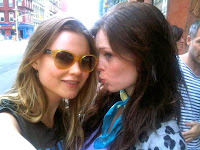 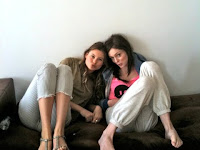 The Second thing I wanted to mention is that I'm doing this great little project with British Vogue called "Today I'm wearing.." (click!) 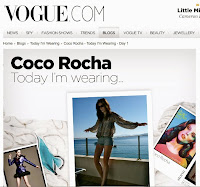 The idea is that every day for a month I'm sending in a picture of my outfit for them to post at Vogue.co.uk - You'll likely see that we models don't always walk around all fashioned out in haute couture. In fact, half the time you'll probably see I'm just stealing James paint covered shirts! Anyway, keep checking back with Vogue, it may not be the guy who took a picture of himself every day for 6 years but I hope its a somewhat entertaining month. Oh and by the way: We've already had one guy criticizing my "photographer" for not using enough "fill-light" in these shots so umm, just like to point out that these pictures are being taken by James, on an iPhone... and not even the new iphone, so... yeah, you get what you get.

Last but not least I wanted to tell you that I've been asked to be the new face of Esprit's FW 2010 campaign! It officially comes out next month (August) but some of the shots are already circulating now so I'm posting a couple here... 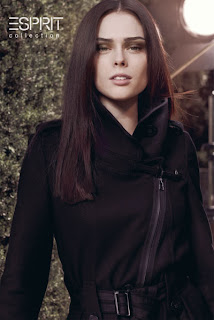 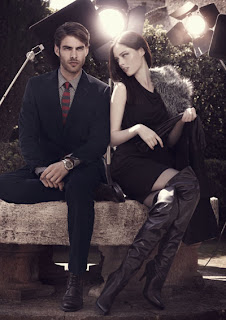 This fall is going to be crazy by the way - lots of amazing things on the horizon, nearly all of which I'm sworn to secrecy on!! For now...

xoxo
COCO
P.S You might notice 2 new things on this blog. If you look at the column to your right you will see a link to my official Facebook page as well as my official Twitter. Add me!!!
Posted by Coco Rocha at 1:44 PM

PS James is doing a great job with the photos... I had no idea it was with an iPhone. Fill-light be damned!

Congratulations!!! The Esprit photographs are amazing and I love the idea behind Today I'm wearing..

Congrats and Goodluck on the continued good work. I will looking forward to the Vogue...'Today i'm wearing'

all sounds super exciting! lovee your vogue bit so far

congrats!!! you are definitely a busy gal these days.
Prepare for crazy heat in montreal... at least 30 celsius every day this week.

Congrats on the Victoria Secret ads, and Esprit's FW campaign. I really like your blog. Keep it up.

congrats on all, can't wait to see the esprit ads!! so stunning. i just found your blog today, but i'm so happy 'cause you're my favourite!

good newS! i love that column at vogue.com.
gonna be great to see what you wear!
have a fantastic week!

love your blog , COCO!!! i hope to see more posts from you !!!
ps. your wedding photos are stunning!!!
http://thecapitalyncillustration.blogspot.com/

Hey Coco,
Congrats on Esprits, thats great! It's also awesome that you've teamed up with VS Pink, every models dream ;) Have to say I love the "What I'm Wearing Today" loved your outfit on July 1st. Hope all is well :D

Hey Coco,
Congratulations on all your good news! I'll make it a point to go see the 'Today I'm Wearing' on Vogue.
BTW, I know you're busy, but if you ever have the time, it would be really cool if you took a look at my blog:
http://ninamorenablog.blogspot.com/
I think I've already used you in some of my posts. :)
XOXO, Nina

I'm so happy that now you got to spend more time with your best friends Behati!! I think this are great opportunities and I only want to say Good Luck!

I love your Espirit photos! Those boots are to die for..... I'm glad to see you're getting busy with work, no one can replace you in any campaign or job otherwise you book! Can't wait to see you on French CBC tonight, I speak it myself so no language barrier there! xoxo COCO BTW, Im overjoyed Vogue had a "Today I'm Wearing" column for ya!

Hi Coco, I'm an artist from Spain.
Congratulations for your fabulous carreer!!
You have a great jobs specially with Karl Lagerfeld.
Your blog is fresh and very interesting.

I'm also a very creative person, as an artist and illustrator I'm interested in fashion and I would like to invite you and your readers to visit my blog:

I'm honoured to introduce you 'Sony the muse'. Take a look!!! I would be very pleased to know your opinion about my art work.

hello,i love you since i saw you on the runway.
please visite if you come to tokyo.we have 2 vintage shop.

you are so lovely! I love reading your blog. You transmit so much positivity!!
Congratulations on your wedding and your blog. Please post a picture of your wedding dress soon!! I am sure you were like a princess.
By the way you are one of the most photogenic models I've seen!

hey,great stuff going on with you.I just wanted to say that you're my role model and I wanted so much to see a picture of you and James on your wedding but there is nowhere in the internet pictures :( hope you post one :)

Love your style Coco, you're one of my favourite model! ;)
Shonwer

great week - it seems. can't wait to see your wedding pics!
And Esprit - the owners are one of our client (for their interior), veru nice people, did you get to meet them?
big kiss

I love the idea of "Today I'm wearing...". Btw, congrats on your wedding, Coco!

There's another Facebook page of yours, not sure if it's the real or fake one. But there's only a display photo of you, and nothing else.. oh, and short "info"

your shots for esprit are GORGEOUS.

Congrats on all! You are doing such a great job!
You look fantastic!

Madame Conrad... you were dearly missed in the blogosphere. Thank you for coming back!

..and another reason to love VS Pink? Behati + Coco = tres awesome!!!

sounds great ! like always :)
if you´ll read this, it would be quite funny, ´cause you seem as far away as -yeah, a "star". but on the opposite you´re quite down to earth and it wouldn´t be that strange :-)
you´re looking gorgeos girl, and you can be proud of yourself, you´re doing you´re job - well!
i feel like a little fan, but who don´t ;)
so ,
greets and kiss from far away hamburg, germany
your lea
(lea-rahel.blogspot.com)

OOher. Very nice. It's really nice to see you do good in this biz coco. Kudos! :D

Hi Mrs. Rocha Conran!
SO happy to finally hear from you again. Everytime there's an update to your creative blog I always tell Mum and the fam hahah. We think you're great. When I told Mum about all your latest successes she said 'Good on her! She's got the brains and the beauty for it!'. I certainly agree. Congrats on the wedding and I can't wait to see some photos. I shall be watching out for your photos on Vogue - LOVE your style.
You are my inspiration :)

I am so proud of all your accomplishments! You really stand out! It's beauties, brains, and exceptional personality that make you such an inspiration and role model to us! :)

I can't wait to be able to call my beautiful fiance the same.