My Honeymoon In Corsica 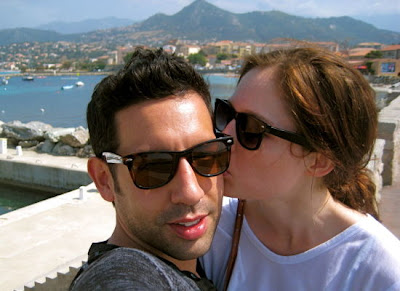 This Spring my fiancé James and I decided to have a fairy tale wedding across the Atlantic in a castle in the Loire Valley of France. Since this was to be a destination wedding we soon decided we didn't want to back-track halfway around the world for our honeymoon. James suggested Corsica as a possibility. Neither of us had been there and, to be honest, I'd never even heard of it! To me the name "Corsica" sounded like a made-up world like Pandora, where the Na'vi live. To my surprise the country was indeed real and in fact very beautiful in all the pictures I saw doing research. When we got there, we realized we didn't even know the half of it.

Corsica is the most mountainous island of the Mediterranean due to the fact that it was created out of a series of huge volcanic eruptions. Picture dramatic cliffs falling into the ocean and rich green mountains rising over the horizon. For the most part Corsica is untouched compared to similar islands I've been to. Nearly half of the land is devoted to nature reserves so driving across the island you get the feeling that this is your own private place. On a road trip going nowhere in particular, James and I set off in our little rental car and hugged the tiny mountain roads, making stops at old abandoned stone farm houses and ice cold mountain waterfalls where we stripped down and swam. We basically saw no one else around most of the time, exactly what a couple on their honeymoon hopes for. When we weren't exploring the island by car, James and I stayed in a gorgeous northern coastal town called Ille Rousse. Within two days we felt completely at home there, roaming the winding cobble stone streets for new restaurants to try. We found the food was mostly a French-Italian mix of pastas, seafood and pizza, and we greedily devoured it all. Both James and I have always hated olives but, for some odd reason, we dared each other to try one in Corsica and we were instantly hooked! I don't know what it was about those olives, but they were amazing and when we came back to New York and tried an olive here, it just wasn't the same.
Corsica is very much your own experience. No one is going to hold your hand to guide you or to hold you back. In all the beaches we lounged on there were no signs posted "Do Not Swim Here" which was both very freeing and a little scary. I get rather nervous when I don't know what else is swimming around me so my snorkel helped me to assure myself that Jaws was not actually right underneath me. The ocean, by the way, was crystal clear and a gorgeous shade of turquoise. I truly loved Corsica, and that funny name will forever be associated with my beautiful honeymoon and first two weeks as a married woman.

We've said we are going back there for our 10-year anniversary.

haha i can see how it would be a little scary, i'd be the one to swim in the wrong place. hope you're having fun on the honeymoon :)

it sounds amazing.
wild and free.
i'd love to go there some day.

Corsica looks insanely gorgeous. It was already on my interminable list of places to experience but it just scootched a few more notches up the list. ;-)

how sweet!!!
so glad you've found each other!

beautiful!
glad you had an amazing time!!
We're still trying to pick a place to have our honeymoon, tones of amazing locations!

Corsica sounds and looks so amazing! I'm glad James and you had such a great experience traveling there for your honeymoon. Congrats again!
Xoxo

Sweet! Garance Dore is from Corsica!

Wow you lucky thing! Sounds absolutely amazing and right up my alley. If you've ever read the book Au Revoir by Mary Moody, you would know how tempting France is with its beautiful scenery and great food. Glad to see that you found a spot like this.

Good on you girl. Would love to hear some of James' comments too!

I'm very happy to see that you choose France again!
Corsica is also known (in France) as the "Beauty Island".
And you can swim without fears, there's no jaws around corsica. This island like many natural sites is protected by laws so that's why in some places you can't swin, it's for the biodiversity's protection...

You could be very well be a travel writer, Coco! You sold Corsica so well. Now I've to add "to visit Corsica" in my bucket list. Although it still sounds a lot like 'paprika' to me. : )

CONGRATS COCO! A stunning and admired woman like you couldn't be on the market for long at all!

You guys make an adorable couple, and I give you my blessings!

Aww.... I'm so happy that you are happy Coco! May your lives be graced with good health. May you always find happiness in your home, and may it be a refuge from the storms of life. May your love grow ever stronger as you share your lives together, and may your future be even more wonderful than you dreamed possible... ♥

Congrats! I've been to Corsica three times, and it's always breathtakingly beautiful. I hope you tried some wild boar stew! It's their speciality.

that sounds like a fairy tale, how did James find out about it?, sounds like a place that should be packed with tourists, I wonder why it hasn't.

Wow, how lovely, and congratulations!
From Carys of La Ville Inconnue

It sounds like a magical place...and going back for your 10th anniversary is such a sweet idea.

Well, I just discovered, did not know you had a blog!
My Parents Went on honeymoon to Italy, and raked him over, but Corsica has to be beautiful, you done come I want to go!
Have a nice day

Sounds like perfection and your honeymoon looks so refreshing. Congrats girl Love your blog

Question...when are you going to do something together with the rest of the Canadian greats as a group? Linda, Daria, Jessica, etc. This would rock!!

i am glad you have updated your blog. im from the philippines. and corsica looks relaxing.xoxo.

You are so lucky to have enjoyed la Corse for your honeymoon! I went on a summer exchange to Rouen and got to vacation with my French family in Corse for a week! I was also in Balagne, don't know if you had the chance to hike up the mountains but there are some beautiful trails, some that date back to the Roman ages (!), with "torrents" to cool off in. There are old villages up in these mountainous parts where Corsicans live just like the olden times. I would also recommmend going boating! The water and coastline are beautiful, and you can make stops, like at St. Florent, for gelato. What a treat to have your honeymoon in Corsica! May you and your husband and enjoy a long and lasting marriage, which is hard work, but we all know about your work ethic Coco!

Wouah! I'm Corsican and what a surprise to see you've been there! I'm glad you enjoyed it!
Hope you'll be back soon =)