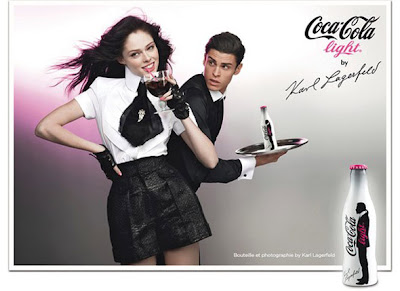 I was super excited when I got the call to work on this project for Coke, especially when I found out Mr. Karl Lagerfeld was behind the design and the camera. Karl designed the bottle with his iconic silhouette on the side and then dressed me as the femme version of him. I remember at one point in the shoot Karl didn't think I had on the right accessories so he stopped the shoot and headed home to bring me a pair of his own gloves and then took off his tie pin and rings for me to wear!! Amazing!

Look for the ad to launch later this month! XOXO COCO

Also, Coca Light is my favorite drink! I drink it everyday, haha.

omj you're just perfect for that!!! :D

Only Karl can make something like that. And you look amazing.
I wish I could get one bottle like this hahaha it will be part of the decoration for my room surely

i really love the picture, the mr karl lagerfeld is magnificent in so much aspects, but i think that in this is one of the best <3 (i write in english so bad lol)

His accessories are amazing!

Your name rhymes with Coca Cola too ;)

Wow! I mean wow! Baptiste is so yummmmy! And coco you look fantastic!

I love you coco and you look so cute in this ad. Baptiste is so ooozing hottttttt! Karl lagerfeld is really amazing.

That's amazing you got to do the campaign! Congratulations on your upcoming wedding!

Glad to hear that you had fun working on this, I can't wait to see the ad... you look great Coco :) I'm only 16, however I'm really hoping that I can be successful like you when I'm a bit older. If you have any tips or advice for me or anyone other young people who want to get into a fashion career (modelling or fashion photography is want I'm very interested in) PLEASE let the words flow here at your blog. I need all the info I can get! Clare

love it! pretty! almost too pretty than Karl will ever be.. almost!

wow... marvelous!
i saw the photo in the web of NY Magazine and i said WOW!...
you look gorgeous in the photo! :)
From Mexico. Carlos A.

I just drank Coca Cola Lite, and although I thought it didn't taste any different, I still love this ad! :)

You just pointed out the clever marketing gimmick of the overlapping Coco's, which are always appreciated.
Canadian pride!

haha i love the gloves and the wine glass is different.

I like that about 50%. You are the 50%. His photography is a joke, I rather Terry Richardson. Karl loves himself. I would like to know what he would think about himself if he was someone else. Had them imported from Paris when they first dropped still haven't arrived :(

I love the coca cola bottle he designed! I already bought it for $64

Cool ad! I think it's interesting that Lagerfeld is working with Coke.

This is so cool!!

i already upload that photo but in my fashion blog you can see it if you want to
http://thefashionwear.blogspot.com

You look amazing! You will always be on top! What was Baptiste like?

haha you are so fit for this campaign. so much coco-ness!

Cute! But I haven't drank a Coca Cola product ever since I watched a couple of documentaries about water. :\

It's gorgeous! I particularly adore the pink hues!

You look great! And this add is really good and different that what we usually see.

Have u kept the gloves and rings? :D

You look incredible and I love the classic Karl Lagerfeld look that you're wearing!
Am now your follower!
Rosie
x x x
www.bed--of--roses.blogspot.com

ah this is brilliant-congrats on the job- it looks like such an chic commercial,

I saw this advertisement at models.com and my brain shouted "Awesome!"

between peace and happiness said...

ha!! this is so amusing!
and you were the perfect choice for this campaign!

ahah omg so awesome :) you're beautiful and the ad is so cool :b

Amazing! Is this your first shoot with Baptiste?

you're amazing! what do you think of this jacket?:D http://www.polyvore.com/malene_birger_wool-blend_drape_jacket/thing?id=9318386

i want your bottle more than Karl's XD

Karl Coke! Love it! You look amazing btw. I can't believe Karl gave you his own gloves and pin! And...mmm...is Baptiste ever good looking...

the ad is freaking awesome!<3

all through out today i read tons of magazines and sites and this is by far the best thing i`ve seen! thank u for sharing part of the process behind a photo, this made my day!
thanks from Mexico

the secret of fashion said...

you're so gorgeous! Love it ♥

beneath the glass said...

wow, what an amazing experience, how exciting! the ad looks great too! your blog is awesome by the way! hope you'll come back and visit mine again :)

im a total soda addict, and this ad campaign is so cute. it definitely makes me want to buy the soda && so cool that you got to wear karl lagerfeld's accessories!!

fall in love with a shooting star...
youareashootingstar.blogspot.com

i dont think anyone else could pull off this role that is kinda playful, kookie, humorous attitude that you give the product.

Hey Coco, do you think you look similar to Ashley Greene? I think you do a bit, so do my sisters. Although, you definately have your own look.
Clare

I loooove this ad!!! You're amazing on it! Each time I look at it (it happens very often!!) I think: SUMMER!!!

<3 Coco you're the best and I'm so glad you have a blog where I can tell it to you as often as I want!

thats the goblet i want!!

coco you're the best!! and thanks for standing up for what you believe in and letting your individuality shine through xoxo!!!