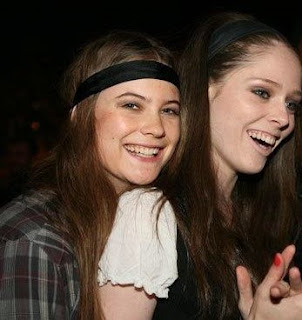 So last night I had a little screening for my E! news gig, and who do you suppose came? Miss Behati Prinsloo herself. We just found out we'll be working together on a shoot for the first time in a long while. I would have to say, the last time we shot together was probably one of the best shoots ever. Why? Because we accomplished nothing. It was smiles and giggles the entire time.

We'll be shooting in Toronto, so I'm excited to show her around my town. We also plan on going to the screening of Valentinos movie, "the Last Emperor" in Toronto as well. It should be lots of fun!!!

Watch out Canada here we come!!!

Hi Coco-
Hope the special turned out well- can't wait to see it! I loved doing your face that week- hope to see you soon. I'm going to e-mail E! and see if they sent my copy yet. xx- Joe

It sounds like you girls enjoy each others company! Have fun!

both look so cute! have fun with B !

happy for you guys! cutest bffs ever!
congrats on all your success

How exciting! I live in Toronto, also. I cannot wait to see the results of your photoshoot!

Coco, you should make a visit to Montreal!

Oh, I'm planning to go to the Valentino screening as well. Hope to see you and Behati there!

Hey...just wanted to say you look fabu in all your July US Vogue features. xoxo

Post new pics! Good luck with the shoot! You and Behati make such cute besties, love you both. Toronto, watch out!

nice! have tons of fun back in Canada! can't wait to see the product of your shoot with Behati!

I love that photo! have fun girls!

nice pic!hope you'll have great time in your home town

and ps, you're both amazing models :)

and ps, you're both amazing models :) Although i never seem to get how to pronounce Behati's name.. How are you supposed to say it?

and they're back in business!

Hi Coco! Im new to the blogging world and just came across your blog, love it :) have to say i love Toronto too only been once but cant wait to go back!!
Much love from Ireland xx
magpie-girl.blogspot.com

The pic of the two of you is adorable.

i can't wait to see the valentino screening!

Ohh I love You .!
I fall in love with you when I saw You 1st time in FTV ^^
I love Your blog
and love Your photos
You're my inspiration..
Kisses from Poland <3

It should be a lot of fun! Even better that you do it with your best friend!

HEYYOU !
Some new stufff are coming on BB&HH... lets check this out (:

You good....the interview with Heidi was funny and cool!

you two looks adorable and cute..hope I could join your group..

I love how the picture is so natural! :] You guys look like you're having a lot of fun.

Find out Empora Coupon Code to get Cheap Women Clothes!

Glad you and Behati had fun!
That's the important thing!:)